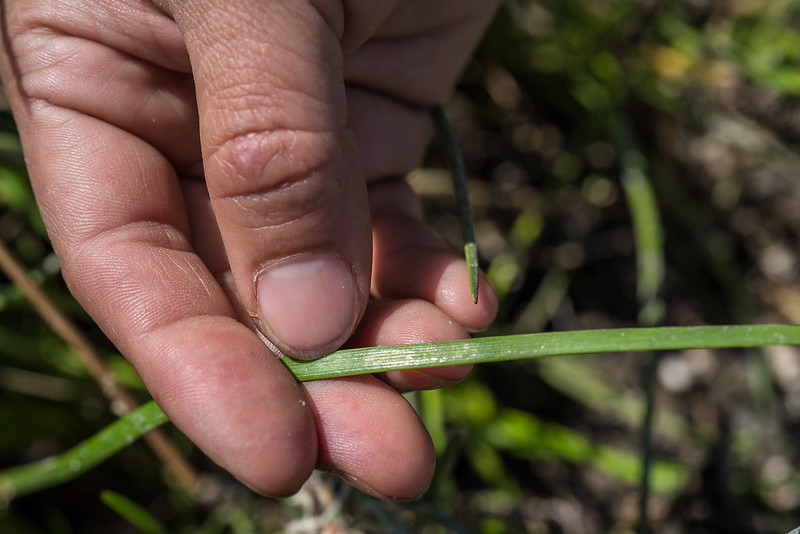 Photos and text by Scotty Brylinsky.

From now until mid-June is the sweet spot, literally and figuratively, for wild greens. They are abundant, tender, and nutritious.

My observation is that many wild greens have a bitter and sometimes astringent taste when eaten raw in the field. But those less pleasant and less familiar qualities fade when the greens are chopped and mixed into a salad.

Twisted stalk / streptopus amplexifoliuss is among the tastiest and tenderest of spring salad greens is this common forest plant.

ID notes: The photo shows it just unfolding its leaves. A defining characteristic of this plant is, as the common name suggests, its “twisted” stalk. The stem zig-zags back and forth at each leaf node, subtly but distinctly. At rare times later in the season, a deadly poisonous plant, false hellebore, can resemble twisted stalk except it does not have the stalk which zigs and zags.

A note on conservation: picking the entire twisted stalk plant will kill it, so harvest just a few leaves off each plant.

Devil’s club (Echinopanax horridum) This is so heavily armored with spines it may be hard to imagine it being edible. But in fact the early spring leaf buds, when about the size of your thumb, are a delicious steamed vegetable. The edible phase on any individual plant lasts at most a couple of days. This window ends by mid-May except in dark, cold microclimates at higher elevations. As always, be careful not to overharvest from any one plant or area. Devil’s Club is one of the few greens which, in my opinion, is best cooked rather than raw in a salad. Steam for several minutes, add butter and salt/pepper. Good with rice or in stir fries.

ID notes: Hard to miss with its heavily spiny stems. By early summer you will find these edible buds only at higher elevations where spring comes later.

Sea lovage (Ligusticum scoticum). This is among the top four wild greens. It grows in the beach fringe, which is the zone above where the highest tides hit but not up in the forest. This happens to be the habitat for several excellent greens. ID notes: The general growth form is 3 groups of 3 leaflets. Younger plants don’t show that character because they’re too small yet, but the general pattern is reliable.

A not-so-tasty look alike is Angelica lucida. Angelica is a deeper green, bigger in general and earlier growing, and notably lacks the 3 and 3 pattern. Angelica is not poisonous, but not good tasting to the point where it’s not really edible.

Wild parsley/hemlock parsley – conioselinum pacificum. This is among the small group of wild greens that is abundant, easy to gather, tastes great, and easy to identify.

ID Notes: Grows most commonly in the upper beach area, above the high tide line. Recognized by its finely divided fern like leaves. Tastes a lot like garden parsley.

Goosetongue – plantago marítima. One of the easiest wild greens to find, identify, and gather. Grows in the high intertidal. This is great in salads, and also in stir fries, where the leaves soften up to an almost pasta-like consistency while retaining a nice texture.

ID Notes: Identified by its long narrow leaves, mild taste, and growing habitat (only a few vascular plants grow in the intertidal).

There is a look-alike that sometimes grows right next to goose tongue. It is arrowgrass (Trigochin maritima). Most books list arrowgrass as mildly toxic, although I’ve known several people over the years who gather arrowgrass and eat it and really like the flavor. Arrowgrass has a strong pungent odor, which is the best way to identify it. The seed stalk is taller than goosetongue’s, and the leaves are thicker. Arrowgrass usually doesn’t grow on the rocky beaches that goosetongue occurs on, rather is more common in more protected areas.

Here’s a recipe for a great salad:

At 24, Scott started learning about wild plant foods, when he hitchhiked from NJ to Whitehorse, Yukon Territory, bought a canoe, and floated the Yukon River for six weeks from Whitehorse to Circle, Alaska. He moved to Southeast AK later that year (1979) and quickly discovered this is a “dream place for a gatherer.” Scott enjoys sharing his wild foods knowledge through various field classes and consuming and making gourmet meals featuring wild foods with his family. He would like to note that most of the foods featured in his posts are or were part of the traditional knowledge of indigenous peoples of the local area and the Pacific Northwest.